It’s been too long! A month, in fact, since you have written me and I have been so slow to reply. I’m sorry for that. I hope you have been well. I’m glad at least to follow you on social media and see that you’re alive and doing all the things. How have you been feeling? How are the new meds you’ve started? How is the dog sitting business going? Any nice OKC dates? Any more word from Mars? From Cory in limbo land? So many questions for you!

And so much news for you as well.

I moved! As you know I had been living in Elise & I’s apartment post-breakup and was stretching to pay for it all myself. It was time to get out. I gave my notice that I would not renew the lease as soon as it ended, packed up all my things, and voila! New start!

I know you will kill me when I tell you this. But Lily and I talked it over. Yes, it’s only been 3 months… but we’ve been spending so many nights together, and it just felt silly to pay two separate rent payments in an increasingly expensive city. Nora, it was only logical! She had room in her place for me, so…

Ok… I am only kidding. I had to mess with you just a little—did you believe me? I did in fact move, but to my very own little studio apartment, signed complete with a one-year lease and all of my stuff snuggly settled. It feels so great and I love it and it suits me.

I do not live there alone, but my roommate is only 7 lbs and eats canned food like a little monster and she likes to chase feathery things and climb on top of me when I am stationary. She meows at me in the morning, and purrs when I scoop her up and hold her. First thing I did once I got the new apartment was drive out to the shelter and pick out a cat to take home. It was love at first sight with a black and white cat who I’ve named Magpie. She is my little love, and I intend for her to live until I am at least 50 years old. I cannot put into words how happy it has made my heart to bring her home and have her, knowing I get to keep her and care for her for a very long time. Right now I am sitting in bed and she is laying by my feet, warm little ball of fur contentedly snoozing. 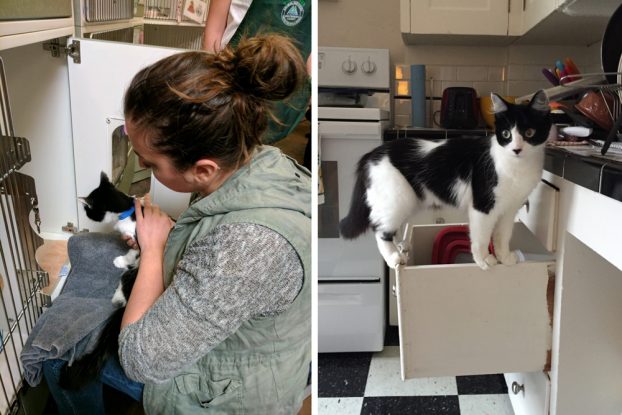 Meeting Magpie at the shelter (L), Magpie in my kitchen (R)

Starting over in my new little apartment, with my new little cat, it’s felt a bit like a parallel to my life 2 years ago. When I just had moved to Portland, set up in my first apartment here with the cats. Before I moved in with Elise. Before I sent the cats to their other homes.

I think about that version of me and I feel as though I’ve changed a lot since I was her.

I feel stronger than her, maybe a tiny bit wiser, or more cynical and cautious. I trust myself more. I know myself better. I love myself more. I’ve started to put down roots in this new place and feel like I’m becoming part of communities here. All of that independent from any relationship. 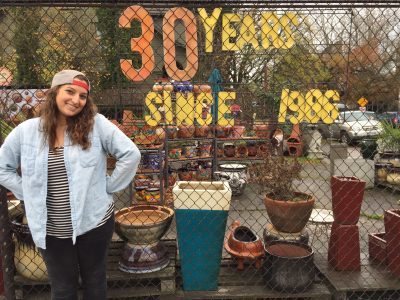 In November, Lily and I and some other friends went to Boston and for some friends’ wedding, and I also celebrated my 30th birthday there. It was special and memorable and reflective for me. It was also somewhat overshadowed by the heartbreaking news of Trump’s victory a few days before. We stayed up late watching elections that Tuesday night, horrified as hope dwindled painfully over those long hours. At some point it was looking so grim I passed out in bed and awoke the next morning to the worst case scenario. It felt impossible, Nora. But here we are.

A friend of mine who lives in Indiana told me while she was visiting this summer, “Ruth, you don’t get it out here in Portland, you don’t know what a real possibility it is he will win.” And I blew her off. That’s what we all did. We blew it off. We made him into a comical sketch and laughed at his absurdity, and now he’s laughing at all of us. Another friend on the west coast said in disbelief: “I had no idea I lived in such a bubble”.

There is a sick pit in my stomach thinking about all the power he will have, all the things that felt like progress that could be undone. I’m so discouraged. I can’t imagine feeling all of that, and then in addition feeling afraid for my muslim or immigrant status, or whatever else he may choose to target that he considers “un-American”.

I’ve also been feeling the need to understand. It’s so tempting to label all of the red in the middle as dumbfuckistan. But that misses the whole point. Laughing at them doesn’t help. Hating them doesn’t help. Demonizing other people has never once helped bridge any gap. There is a gap in this country. And as much it infuriates me that it feels like we’ve taken steps backwards, I know that those 62,979,616 people who voted for Trump are not all idiots, they are not all evil, they are not all racist or homophobic, or anti-the-environment or anti-immigrant. I grew up in Indiana and spent my whole life there around those communities of people.

Life is not black and white. It is a big puddle of gray.

And there are honest, hard-working, kind-hearted people who voted for Trump with good, albeit misguided, intentions–whether or not you can believe it. I disagree with their choice wholeheartedly, but the information they received in their corner of the world helped them believe they were making the right call. I pray to the universe that he does no irreversible damage. I am terrified, and a little in denial. I don’t know what the answer or plan of action is here. But I don’t think it’s rioting in the streets and beating effigies of Trump or bullying those who voted for him. I remember conservative people saying horrible, awful hateful things about Obama when he was elected. It’s hard for me not to shudder when I hear those same things now being said by liberals around me about Trump. Are we no different? We have to be different. We have to look for ways to bridge the fucking gap and understand each other. After all, isn’t that what we’re asking them to try to do? Understand us and care about us? I think it has to go both ways.

Ok, my rant is over! I LOVED what you said: ” I want to be more open I want to advocate and do activism. I wanna fight for Black Lives, women’s rights, reproductive rights, gay rights, accessible healthcare, removal of mental health stigma. The Trump administration is going to be the beginning of my revolution.” I think that’s a really good way to approach this.

If nothing else, this should be our biggest motivator of all time to make shit happen.

Lily and I are moving right along, three months into our new relationship. I can safely say it is unlike any relationship I’ve ever been in. It doesn’t feel suspenseful or half-assed or entangled or co-dependent or game-ridden or fraught with tension or needy. There’s no element of trying to get the other person to do or say or feel what you want. I’m not saying all of my previous relationship experiences have been bad… but this feels remarkably different and healthy. It feels almost silly now that I had ever settled for less of a good fit than this. She blows me away Nora. I am surprised daily by her kindness and thoughtfulness. I can feel how genuinely she likes me, not because of what I add to her, or change in her, or because of something I do or say or a role I fill, or something I may become. She loves me just as me, not because I offer anything.

Because I’m me, she loves me.

I feel safe with her in a new way. She is unselfish, un-manipulative, sincere and honest. She is so happy for me at my new apartment with Magpie, and doesn’t guilt trip me when I need space or alone time. But is always happy and excited to see me again, and makes me feel like a queen. I am doing my best to be cautiously optimistic and keep my eyes open, and watch my words so that time can do what it does best—boils things down to the truth. But I am hopeful, and I think that is ok. She makes me laugh, and when I don’t feel like laughing she cares to take the time to find out why. I’m playful and unguarded with her in a way that continues to surprise me. 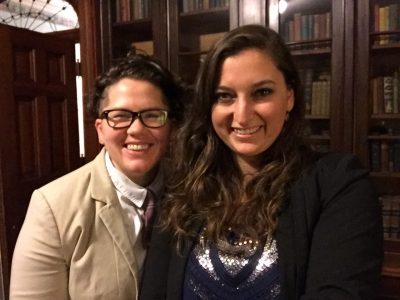 At the wedding in Boston with Lily

We haven’t fought at all yet. Should that worry me? I would say yes if one of us was giving in all the time or being a pushover, but it feels pretty balanced and the not-fighting seems to be a result of just open communication and generally on the same page about most things.

She is definitely a hopeless romantic type, but also with a firm foot in reality. She hasn’t gotten caught up in all the things like I have. She hasn’t actually been in a relationship, have I mentioned that? Some of it has to do with her coming out later in life. I also think it’s because she didn’t seem to feel the need just to be with someone, unless it was someone she felt a really strong connection with. She is pretty content and happy on her own, and spent her 31 years of being single traveling and forming good friendships and getting to know herself well and working at becoming the person she wanted to be, as well as furthering her education and career. I admire and respect her so much for that. I remember my desperate feelings of wanting to find someone, even at age 21. But I can tell she isn’t with me just to be with someone. She’s with me because she would pick me, even if she had dated many people before me. As she should! I am pretty great, after all. I joke with her that she just started with the best first (but I also mean it) and saved herself some trouble.

I am headed off tomorrow to spend Christmas with her and her family. In Florida… of all places. I’ll try to not wait forever to send more updates. In the meantime, tell me all the things!

P.S. I know I’m being pretty insufferable with this in-love new relationship boring monogamy crap. #sorrynotsorry You know I can’t help it!