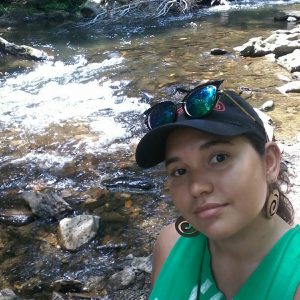 Nora is a Pansexual Polyamorous Fairy who lives in Philadelphia

Nora was born in Barranquilla, Colombia. Most of her childhood was spent reading Bible Comics and avoiding asthma attacks. Among her other pass times were collecting mangoes for fruit salads (consisting only of mangoes) and sitting in front of a fan to survive the deadly Caribbean heat. Her religious upbringing was mostly Presbyterian.

Nora moved to Brooklyn, NY at the age of 16. Left her family behind and lived with two separate aunts for about 2.5 years. A soon as the opportunity arose, she moved out to chase the American Dream which somehow has managed to escape her all this time. Nora was a devoted born-again Christian until the age of 23 when she was antagonized and slandered in her church for admitting she liked women.

Nora moved from NYC to Los Angeles in the summer of 2014, after her girlfriend at the time found a job over there. That relationship did not work out and she got stuck in California for the next three years due to a series on unfortunate events.

In the summer of 2017, Nora moved to Philadelphia to pursue an accelerated Masters on Science that will help her get into medical school. She wants to be a doctor and cure all the people suffering mental illnesses.

Letters of the Rainbow is the opportunity to share a very personal story of coming terms with the complexity of identity and becoming more authentic every day. It is written to help you come out as YOU, accept YOU and love YOU.