Just when I think I know what’s up, the universe likes to have a good chuckle at me and show me how much I don’t know about life. That’s what’s happened over this past week Nora, and I’ve just had to sit back and laugh and marvel at life’s funny way to twisting the plot. I should have seen this coming, but it caught me by surprise.

You are going to kill me.

I befriended this girl a little while back. Let’s call her Lily. Lily was a friend of a friend and I saw her around occasionally but knew her only in passing. Then, last winter she joined the choir that I’m in, so I started seeing her more regularly. By the time Elise and I broke up in May, we had the beginnings of what seemed to be a promising friendship, and I knew her enough to know she was someone I really wanted in my life.

I decided to make her a friend goal. I felt a strong pull towards her, and I wasn’t quite sure what it was–but I wanted to invest time in getting to know her. Things I did know: I really liked spending time with her, I felt safe and unjudged and ok as-I-am with her, I laughed more with her than almost anyone, I shared things with her that I don’t normally share with people.

Whenever we hung out, it just felt… comfortable and effortless to be around her.

Our friendship began to grow, naturally. She seemed to be just as interested in spending time together as I was. I progressed with my freedom summer of dating and being single, and she was a support and encouragement as I navigated my way. No matter what else was going on, I looked forward to seeing her again. Over the months spent getting to know each other, I had these little thoughts in the back of my mind that I tried to ignore… “I wonder… is there more here?”, “Why do I feel such a strong connection with her?”, “Am I attracted to her as more than a friend?”. I confided in a close friend that I felt like I was developing stronger feelings for Lily, but I wasn’t ready for them yet. I cared so much about her I didn’t want to do anything to squander an opportunity if there was, indeed, a chance that we’d be something. But it only seemed to grow, and it got to the point where I just told myself, “wait. you are going to date her. just not yet.”

And then, “yet” arrived.

We were eating tacos and I was jabbering on about something (have I mentioned I talk more around her than most people? also, that I love trying to make her laugh?) Anyway. And then she said, as though it were just an ordinary thing to say, that she was sorry if this complicated my current dating situation, but she needed to tell me… that she had feelings for me. She said it had been growing for months, and it wasn’t healthy for her to keep holding it in and have it turn into anything negative, left unaddressed. She said she expected nothing in return, and knew where I was at with dating and wanted nothing more than for me to continue with my process. She wanted very much to remain friends, and figured this would just be something she had to “work out”.

It was quite a surreal moment. I sat there a bit stunned, and just suddenly felt that I had already seen this part. Like I had always known somehow that this was going to happen and she and I were just little pieces on the board game of the universe. My heart felt full in that moment. I told her I also had more than just friend feelings, and that I felt the connection too, and had the sense this was something “bigger than me”.

Yes, you might say I’m lost in the sauce. But that implies messiness. This feels like one of the least messy things I’ve done. It feels so right, and I have a sense of peace. She’s something really special. I’ll tell you more about her in upcoming letters. Having the opportunity to get to know her as a friend was so ideal, I couldn’t have planned it this way if I had tried. 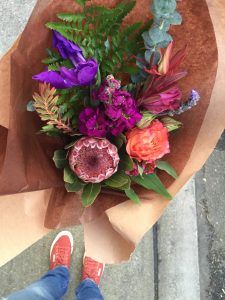 I am moving forward, intentionally. Knowing how important it is for me (and her!) to keep focusing on my own needs and not giving up who I am for someone else. Not letting my softness become the “worst of me”. And working to focus on things that I know to be true. Seeing her as a real human, not some idealized version I build up in my mind. Being honest with her and myself about where I’m at.

“I choose to love this time, for once, with all my intelligence.”

-Adrienne Rich in Dream of a Common Language

She offered to wait if I needed more time before dating. She asked how she can help make sure I’m taking care of myself. She said the last thing she wants is for me to lose myself in any way. I believe she sees the light in me, Nora, and she wants me to keep shining.

If I told you it’s different this time than it’s ever been, would you believe me? My gut says it is. At least, I think that’s my gut talking. Don’t worry, I am still adequately terrified. But the wave that’s moving me forward is stronger than my fear of starting this. I think if it were anyone but her, I wouldn’t feel ready to start a new relationship. I’m not sure what that means, but I do know I feel safe and known in a way I haven’t in a long time.

I think this is going to be good thing, Nora. Try not to judge me too harshly… I made it to just about 1.5 months out from my 30th birthday!

Naturally I had to end things with Sam once I realized these feelings with Lily were mutual and that it was going somewhere. I knew that continuing with her in any way would most likely end in her getting hurt, since I didn’t see that going anywhere long term. I tried to do it in the kindest way possible.

This whole thing has been a bit surreal, and I’ve had trouble putting it down on the page for you.

I’m going to have to end this letter here, I’ve been traveling quite a bit this week and my train is getting ready to leave. This whole letter is about me, thank you for being a good listener and friend. Let me know how you are doing! I hope you have updates from your canyon on Mars, and that you haven’t been too isolated lately. I think of you often and send out good thoughts to the universe for you.

Feeling all the feels, Ruth