Thank you for writing, I have missed you. I’m afraid my updates for you are far from the “perfect lesbian life”. I ended things with Lily about a week ago and this week has been one of a heavy heart. It gutted me to end it, but I knew it was the right thing to do. Let me go back and explain.

Everything was moving along swiftly and swimmingly with Lily and I honestly could not ask for a better girlfriend. But a few months in, a pit arose in my stomach and a small voice told me “this isn’t it for you, Ruth”. Per my habit, I told the voice to shut up and continued. There was nothing “wrong” in our relationship! We literally didn’t even fight! It was peaceful and easy and fun–we cooked together and took time apart and did all the adulting things. More than that, I was myself, fully, while being in it. The voice didn’t know what it was talking about. 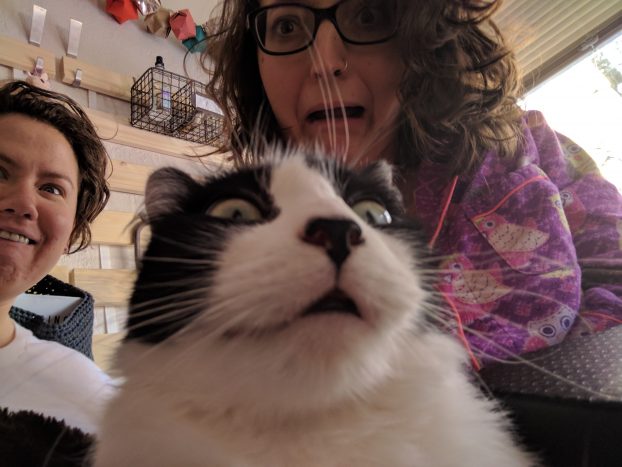 Lily, Magpie & Me being goofy

But it persisted, and it grew louder. It was my gut speaking up. Eventually I started to listen to it, and after fighting it for a while longer, I gave in to the Truth. I was so happy with Lily. But I was not in love. I didn’t have the deepest kind of feelings I needed to have. I have a huge place for her in my heart, and think the world of her, but I didn’t have the butterflies, the excitement, the hunger and fire I needed to make this a long term relationship. Not everyone needs those things… but I know that I do. I had excitement and hope at the beginning of where I pictured us going, but something was missing for me–I realized as we dated–and I knew I wasn’t going to get there. The realization gave me a sick feeling in the pit of my stomach.  Fuuuuuuuuuuuuck.

Unfortunately when it comes to relationships, the long term ones have to be a unanimous decision made by your body, your heart, your mind, and your gut or else they’ll unravel.

And there seemed to be some divided opinions amongst my body, mind, heart & gut that were unwilling to be swayed. The only right thing to do next was to be honest with Lily and to let her go, so that she can find someone who can be in 100%, the way she deserves. I felt a sense of urgency to end it sooner rather than later, since I was the first person to hold her heart like that–I knew the longer I waited the more damage it could do.

That was some of the most painful news I’ve ever had to deliver. She was so upset Nora. So angry and hurt and betrayed and heartbroken. She felt it was so unfair that I never gave her a chance to weigh in on the decision to end the relationship. She said she should have gotten a chance to fight for it. But I didn’t feel right allowing her to fight for something my gut told me was not mine to keep. It’s so hard to explain to someone that nothing is wrong with them, and that in fact they’re the most wonderful person, but still, you cannot stay.

Trust that the most compassionate thing of all is to release those we don’t love hard enough or true enough or big enough or right. Believe we are all worthy of hard, true, big, right love.

“It’s ok Ruth. It’s ok if you can’t give everyone, everything they need. It’s ok that you tried to love her in that way and ultimately couldn’t give her that. It’s ok that you went in thinking it would go a certain way and it went another way. You tried. You gave it your best. It’s ok to love someone and then realize they’re not the one for you. It’s ok to walk away. Be compassionate, be respectful, be kind, be thankful. It’s ok to take care of yourself and do what feels right in your gut. I give you permission to love and not end up with someone. I give you permission to listen to yourself.  It doesn’t make you heartless. It doesn’t make you a quitter. It doesn’t make you a liar. It makes you brave. It makes you honest.”

I don’t regret dating her, even though it caused her pain in the end. I know she will heal. I think we will both be stronger and the love we shared will leave more happy memories than sad ones. I know I learned a lot and I think she did too. She gave me a new kind of hope, that it is possible to be free and myself and not people-please in a relationship. I don’t know why she isn’t mine for sure Nora, but I am trusting it. I am trusting that I will know why some day, and I hope she will too. I am also holding out hope that she will be able to come back into my life as a friend, when she is ready. She wants that, too. We have a special connection, and even though it’s going to be different than what I thought, I think there is still something very much worth saving there.

I watched the visions I had for us and our future go out of focus in my mind. And it was like watching a different life that might have been mine, but wasn’t meant for me. Something else is meant for me and I feel it coming. I feel like there is hard work ahead for me this year, I feel like there is something for me to do, to work on, to become. And I feel like I am supposed to do it on my own, and that I will be alone for a while this time. I feel this calm sense of peace, but also the weight of something coming. It may just be growing pains. Whether I like it or not, I am making room for something bigger in my life.

So much in so little time, already in 2017. What else will this year hold? The current political climate has been like a living nightmare, watching it unfold. It is terrifying. I have been heartened by the outcry of people, by the uprising of so many–joining  together to fight to keep progress in place that has already been hard fought, and to push on ahead. Marching in the women’s march. Going to protests. Calling our representatives. I am going to focus on a few areas this year as well. First and foremost, I have come to realize I can only be an effective advocate and ally if I am truly educated to the experiences of others. And there is no excuse for ignorance. So I’m working to seek out the stories of those who have been oppressed in our country. The list is long, but I think starting by understanding better the lives and experiences of women of color especially will help me be able to better fight for my sisters. I have also felt really compelled to better understand and advocate for climate justice, especially as it effects social justice.

I’ve just been asking myself “How can I amplify the voices of those who are silenced?” “How can I share the stories of those who’s stories have been lost or untold?” The first step is to seek out those stories and hear those voices.

I’ve been really in awe and inspired by some powerful women who have charged ahead through endless obstacles throughout their lifetime, recently I got to hear Janet Mock and Dr. Melba Beals speak. I also finished reading Sisters in Law, about the first women on the Supreme Court and the fight for women’s legal equality–Ruth Bader Ginsberg is my personal hero. It was well timed with the women’s march. 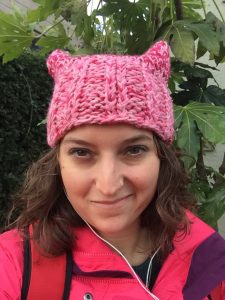 I think you are right to focus on a few core issues. So that is where I am beginning. In addition to women of color and climate + social justice, I also feel called to work on building the bridge over the gap in this country. I know it is a huge gap. But the truth is Nora, I used to stand on the other side–growing up I thought George Bush was God’s gift to the earth and that nothing was more wrong than abortion and homosexuality. I feel ashamed of that now, but I honestly didn’t know any better and that was the “truth” I had been taught. And look where I’ve evolved to! Just a big-ole liberal lesbian living on the West Coast protesting Trump and marching for women’s rights. I know there are others over there who would do better if they knew better. I know there are others like me who can change. Maybe I can help them know better.

I am so excited for you and your SLAY goals this year. If anyone can SLAY, it’s you!! I’m happy to be here to encourage you along the way. I am glad we can encourage each other. With the breakup and the political clusterfuckness of this year so far, I am determined more than ever to be mindful of how I use my time and energy, how I treat myself, and to make the most of this year.

P.S. Send good thoughts into the universe for Lily when you think of it. She deserves all the good things this world has to offer.

P.P.S. THANK YOU FOR MY PUSSY HAT AND GAYEST PILLOW EVER. I love them so much. Everyone should buy things from your shop!!!

P.P.P.S. I compiled my list of intentions/things to work on this year too! 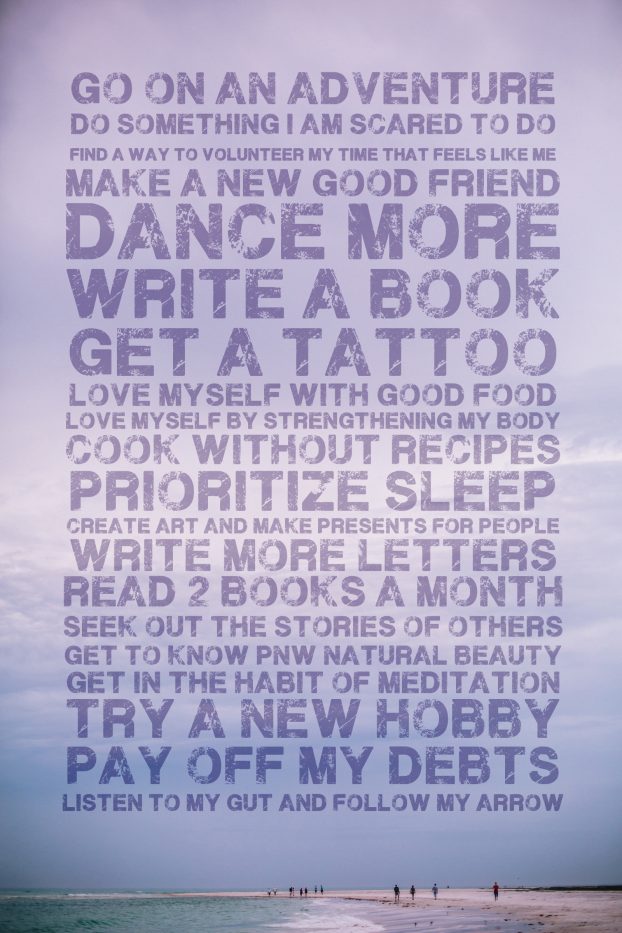